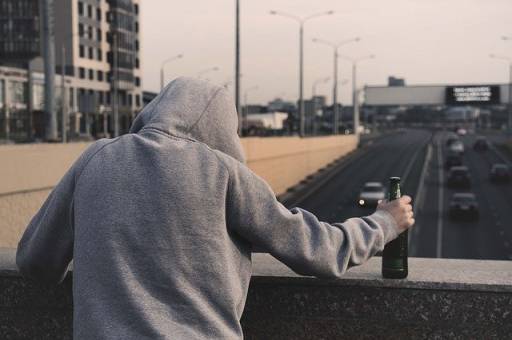 Discussing The Five (5) Stages Of Alcoholism

The slippery slope of addiction – the Stages of Alcoholism.

We are in a society where many people drink alcohol and it does not turn into a problem for them. A lot of people can just ‘take it or leave it’. Personally, I have never been one of ‘those people and whenever I drank alcohol – or other drugs like cannabis or smoking – I just couldn’t be that person that takes it or leave it.

Yes, there are people that can..but there are also many of us out there who sit in my camp when it comes to consuming alcohol. Drinking alcohol for a lot of us can lead us to be out of control, physically and mentally. When we drink to these extents then we can often put ourselves on a slippery slope towards alcohol addiction.

“There are an estimated 589,000 people who are dependent on alcohol in England and about a quarter of them are likely to be receiving mental health medication”

This is an enormous amount of people that are currently drinking alcohol regularly – and who view it as a necessity. When we drink alcohol, getting to the level of dependency is not something that just happens overnight. It takes a lot of drinking time to get to that point and is borne out of long-term alcohol abuse.

Within this awful cycle of alcohol abuse, there have been identified stages of alcoholism. Each stage may have different situations and present differently for individuals, but there are common signs and symptoms that each stage has. If we can educate ourselves about these symptoms, it can help in stopping us from tripping along to the next stage and going down the path from further dependence to addiction.

As young adults, we are introduced to alcohol in many different ways. This could be experimenting with friends, family get-togethers or many other scenarios really…such is the nature of the socially accepted drug that we call alcohol.

Although when we experiment, our body is not used to the poison that we are putting into our body, we often throw it down our neck to excess. Far more than is actually needed or warranted to feel the effect of alcohol. But we do, due to the nature of how alcohol works making us want more of the feeling. During this stage of drinking, we may not drink regularly to excess but when we do, we drink a lot more than our body can really take. We binge drink

When people do go out and binge drink, they often drink far more than this NHS guide/recommendation on what binge drinking is. Let it be known that binge drinking can lead to multiple health risks, including coma or even death. As people continue to drink in this manner, there is often a pattern that these levels of drinking increase and also become more frequent.

The stages of alcoholism – stage two
Levels of drinking increases

During this journey of alcohol abuse, the user leaves stage one and moves on to stage two when they start to drink more regularly. From the world of experimenting with friends and at social gatherings, drinking becomes a bit more habitual. Drinking regularly at weekends or during the week is more apparent.
This could be for a number of reasons.

To meet friends socially
Work-related events or ‘way of life’ – drinks after a hard shift or an easy shift…or just to unwind after work.
To socialise, maybe if you are living alone and go to the pub for company.
Out of boredom
‘Habit’ – just ‘because’.
To signify the end of the working day.

Reasons are varied between people, but the general theme that emerges is increased drinking. As a person increases alcohol consumption, there is there extremely slippery slope of becoming more dependent on alcohol…and moving further down the stages of alcoholism to the next step.

Regularly drinking to excess will eventually turn into what is described as ‘problem drinking’. It is at this stage of alcholism when the drinkiner starts to feel the effects of their drinking habits. It is here when the drink changes from being an occasional issue in thier life, to a ‘problem’. It is also at this point when either the drinker starts to thing ‘do I have a probelm with drinking’ or others around them notice that drinking is starting to affect their lives.

The drinker might start experiencing lowered mood or depression, beciming anxious in day-to-day situations or it might start affecting their normal functions such as sleep or eating. I remember when I got to aroudn this stage and nausea was a common side-effect of heavy drinking. Feeling too sick to even consider eating. This is another common symtom of the problem drinking stage of alcoholism.
At this stage, alarm bells are also set off as they fall foul of the wrong side of the law – drink driving or other behaviour that catches the eye of the legal system.

When a person is on their journey of alcoholism (for want of better words!), we look at the journey in two aspects. That of addiction and the aspect of dependence. A person can become dependant on alcohol but not be addicted to the drug.

Alcohol dependence is the next step along, following ‘problem drinking’ You are now faced with alcohol being part of your life and it has impacted on other parts of your ‘normal’ life. Alcohol is clearly affecting you, with side effects evident but you continue to drink without control.

As you are drinking more alcohol, you are also increasing your body and mind’s tolerance to alcohol. You can take more drink, and require more alcohol to get the same effects as you have previously experienced with less drink. More drink brings with it more health-related risks.
Another symptom that is evident can be alcohol withdrawal. Symptoms of stage four (4) withdrawal can include

The fifth stage of alcoholism is often viewed as the final stage in the medical world. This is the sttage when the drinker is no longer drinking to gain any pleasure. The nature of alcohol addiction is that there is a physical and psychological requirement to consume alcohol.

The drinker will require to consume alcohol, often without any consideration for any consequences. The cravings will be that strong that nothing will stop the desire until alcohol is drunk.

It is not uncommon for people at stage five alcoholism to use other drugs, illicit or otherwise.

A good friend, and renonwed clinican in the world of substance abuse once said to me that a good rule of thumb is…if you think that you may have a problem with alcohol, then you probably have. What you do with that information is what is important. You only have one life and a sober one is so, so much better than the alternative.

This site was set up to help anyone who thinks that they need help with alcohol.

I have personally lived through two decades of alcohol and substance misuse, and believe that I am living proof that there is a life on the other side of the wall.