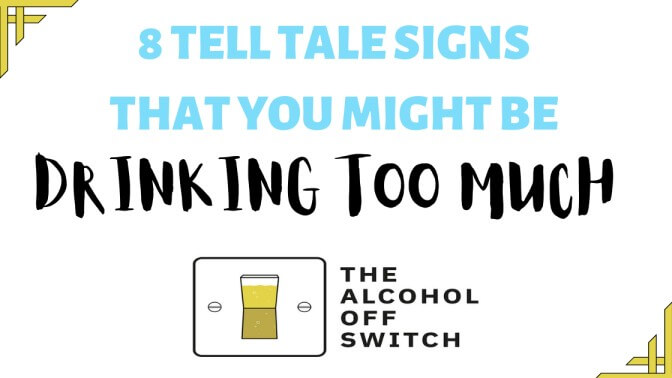 8 Tell-Tale Signs That You Might Be Drinking Too Much

You are surrounded by people drinking, and you are fully immersed in it all, the buzz continues and the drink continues to flow.

Do you find yourself powerless to say no to that next drink, when all around you are getting the drinks in?

And all the while you are adding the odd chaser, or getting involved in drinking games as the day and night continues. Finding yourself being extremely aware of when the bar or off license is closing. Stocking up before hand so you know it would be impossible for you to run out of drink for the duration.

Studies by the Centers for Disease Control and Prevention in collaboration with the Substance Abuse and Mental Health Services Administration (SAMHSA) conducted a study that 1 in 3 adults drink to excess – nowm while we are talking about alcohol use disorder, let that number sink in.

One in Three Adults…..drinking too much alcohol. Literally pouring poison into their bodies. One in every three.
Scary stats.

Although The Alcohol Off Switch heavily promotes living an alcohol-free lifestyle, there are people out there who can actually drink and moderate, a few drinks a few times per month – I am not that person and I am guessing that you are at least concerned that you may not be either – simply by the fact that you are reading about the very thought you might be drinking too much alcohol.

Alcohol is a devious character and sneaks up on you in true drug style.

The signs that you might be drinking too much can vary from person to person. The signs could be physical (weight gain, bloating, medical conditions), or psychological such as a decrease in mental health, or tiredness, Here are 8 signs to look out for that might give you the light-bulb moment – a way to help you find your own alcohol off switch.

When we talk about memory – there are basically two ‘types’ – long-term and short-term memory.

Now, of course we can all forget things – this is part of who we are, but chronic users of alcohol often forget more than people who are alcohol free (AF).

And it starts to become noticeable, with memory loss creeping into other aspects of your life like basic problem-solving, issues with basic thinking, counting, and having a short attention span.

Throughout the day, the thought of reaching for a beer/wine becomes more and more. Can you relate to this?

Sat there at work or home, and the main topic inside your head is what you will be drinking that day, where you are going to get it from, how much alcohol are you planning on drinking – or indeed how much drink you need for the day/night. These trains of thought can exacerbate withdrawal symptoms from drinking. Seek help if you feel that you are suffering from alcohol withdrawals.

3. People around you mention concerns about the amount that you drink

Or, maybe even you start getting referred to as ‘the one who likes a drink’? I remember during my own drinking days, I was often known as the one that can ‘handle his drink’.

While this could be seen or even intended as a compliment, the fact that it is getting commented on is definitely a red flag that you are being associated with alcohol in general.

Words like ‘oh you were drunk? No surprise there (with a smile and a pat on the shoulder). Again, the person speaking may well not intend any harm at all, but it is definitely one of the warning signs that you might be drinking too much.

Often people around you will notice that you are drinking alcohol to excess long before you even realise it yourself.

4.You NEED to have another drink to get the same effect that you previously used to

Think back to when you first started drinking. How much actual alcohol would you drink before you started feeling the effects. Now think about how much alcohol you can ‘take’. Gone are the days that 1-2 drinks were more than enough. Now you are looking at 5-10-20 or whatever amount to get drunk.

Increased tolerance to alcohol is a big sign that you may be dependent on alcohol, or at least have an alcohol addiction.

My mum is a teetotaler, just something that she never liked doing. It hit home for me that I was drinking too much when I considered that one of my drinks would floor my mum. And there I was easily knocking back 10+ strong drinks with ease. For me, that was one of those moments when I realised that I needed to do something about the sheer levels of drink I was consuming.

Actually, this was and still is a massive part of how I found my own alcohol off switch.

5. You get on the defense when someone comments on your drinking.

Someone, perhaps more than one person or on different occasions has suggested that you might want to slow down when it comes to boozing.

If your initial reaction is to take this as an insult, this could be an indication that they have hit a raw nerve. Why might this be? If the person that says this is actually someone close to you and cares for you, why would you feel that they would say this, other than just to insult or upset you? Why might you get on the defensive in the first place? Have they hit that nerve for a good reason?

Maybe they are actually saying something about your drinking habit that you have already considered, but the very thought of you actually accepting that you are drinking too much is quite a scary one.

The very thought of facing up to your drinking habits itself concerns you. Red flag? Certainly, something to not ignore, and often one of the signs that you might be drinking too much alcohol.

6. Health issues that can be attributed to drinking

Although you are not directly told by a doctor that your drinking is an issue, you are finding yourself with health issues related to alcohol. An accident that leads to injury? Pains (e.g. back, stomach, torso sides, headaches) where you have not had pains before. Although these pains could be attributed to other reasons, these pains are appearing more and more as your alcohol intake increases or as days go by.

Hangovers are a common issue when drinking, but are these hangovers disappearing? This one of the signs that you might be drinking too much. As your drinking levels increase, and hangovers are less/more part of your ‘normal life’, this is a sign that you need to take a good look at your drinking.

7. You are worried that your drinking has gotten out of control

If your drinking has hit your own worry radar, then that in itself is a good indication that might be drinking to much alcohol.

It has often been said that a person without an alcohol problem does not SEE alcohol as a problem. While this is not mean that the person who does not consider it, does not have an issue with drinking, we all know ourselves better than anyone else.

We have to be honest to ourselves, to protect ourselves and to make sure that we are the best version of ourselves that we can be. If you think there is a problem, then quite often there is.

8. Drinking is your go-to coping mechanism

This one is something that hit home for me in the early days of drinking, my first real red flag when it comes to drinking. Realising that alcohol was my main/only coping mechanism.

Bad news? Reach for a drink to drown the news and deal with whatever life had thrown at me. Stressful situation? Grab a beer and calm myself down. Unhappy? Down something, then some more and some more. Can’t sleep due to worry? Yep, straight to the bottle.

Does this sound familiar? We all need ways to deal with what life throws at you, and if your only or main coping mechanism is alcohol – it is time to take a look at how you are coping with life and review what you are doing. It is time to look at your relationship with alcohol, and make a change.

It is time to find your own Alcohol Off Switch

This list is FAR from exhaustive, but these are definitely some of the more common signs that you might be drinking too much, or at least give you food for thought.

For the record – I strongly believe that we all have an alcohol off switch – it is finding that one thing that hits home with you.

Find yours and you will not regret it!